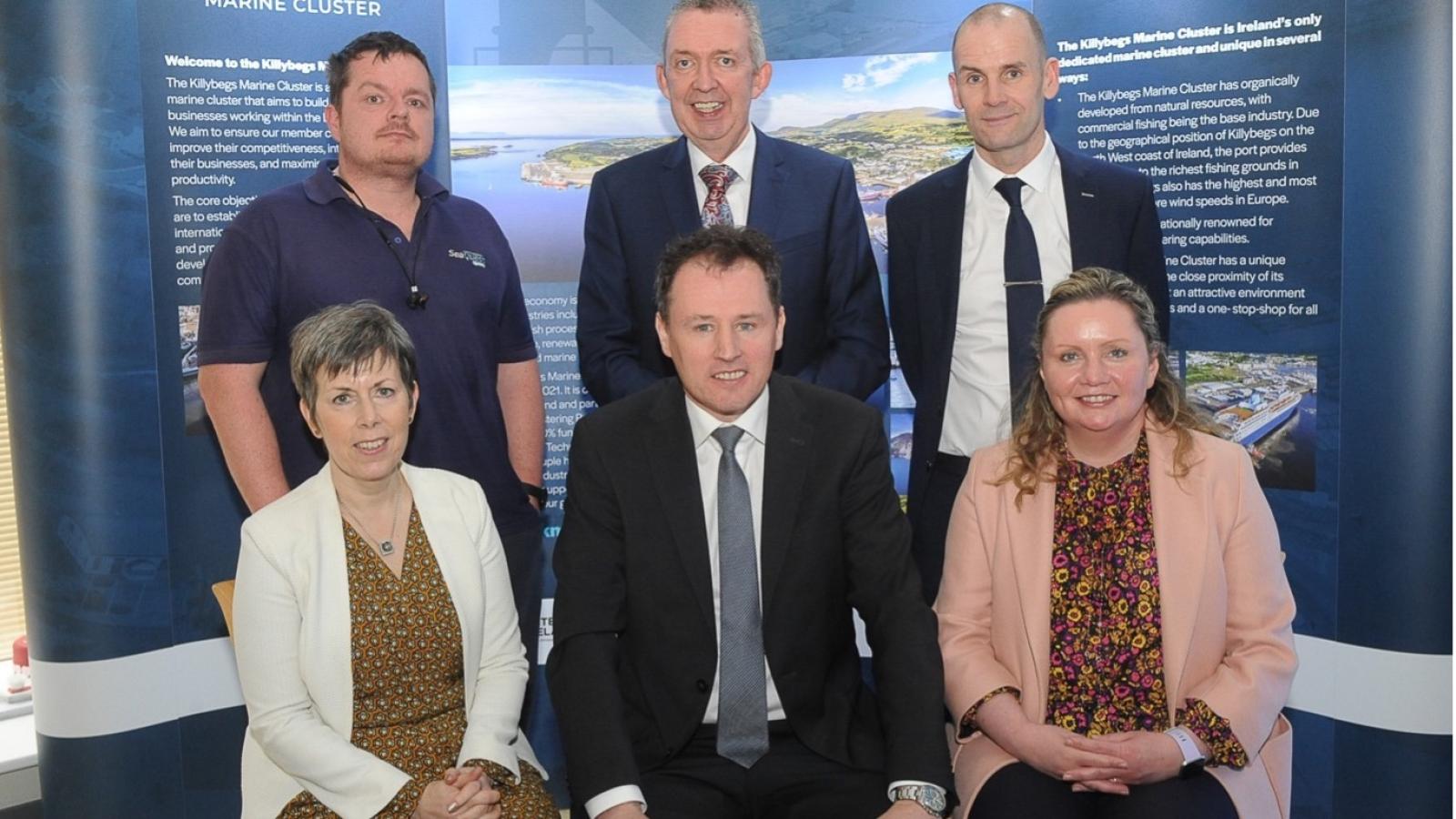 Minister for Agriculture, Food & the Marine, Charlie McConalogue TD, officially launched the Killybegs Marine Cluster this week (Monday 11 April) in the Killybegs campus of the newly formed Atlantic Technological University (ATU). This initiative aims to address the needs of industry while adopting a blend of industry, academia, government and community support.

The Killybegs Marine Cluster is one of twelve clusters on the island of Ireland established as part of Enterprise Ireland’s National Cluster Programme and is the only Cluster dedicated to the Blue Economy. The Killybegs Marine Cluster, in collaboration with Atlantic Technological University (ATU), is currently 100% funded by Enterprise Ireland under the Regional Technology Cluster Fund (RTCF).

Commenting on the launch of the Marine Cluster, Minster McConalogue said, “I am delighted to be here today to join in on marking this momentous occasion. The Cluster has the potential to be an embarkation point for Killybegs and the north west. As a Donegal man, it makes me proud that the first Blue Economy Cluster is in my home county. We are a maritime region with a strong tradition of blue economy. I welcome the support and recognition of Enterprise Ireland, Atlantic Technological University, the Killybegs community and businesses, along with local politicians including Cllr Naughton.”

Speaking at the launch, President of Atlantic TU, Dr Orla Flynn added, “It is such an honour to have the opportunity to support and celebrate the launch of this cluster in collaboration with the launch of Atlantic Technological University. The Killybegs Marine Cluster aligns itself with two symbols of Atlantic TU’s very existence; collaboration with and support for industry, particularly for SMEs; as well as our relationship with the Atlantic, which captures the very essence of the university’s identity. It is our mission to be a magnet for talent and an anchor institution for the region. Supporting initiatives such as the Killybegs Marine Cluster through education and research will develop the west and North-West region.”

Aidan McKenna, Regional Director of North-East and North-West Region, Enterprise Ireland was keen to add, “Enterprise Ireland are delighted to support the Killybegs Marine Cluster under the Regional Technology Clustering Fund.  We work with Karl Bonner, the Educational Outreach Manager for the cluster, and ATU Letterkenny on an ongoing basis in order to strengthen increased SME productivity, drive SME competitiveness and support internationalisation activity for the cluster.  While we are building on an established tradition of cooperation that exists among members in Killybegs, we are already gathering evidence that this targeted engagement with industry is assisting member companies to diversify and expand their operations.”

The objectives for the Killybegs Marine Cluster are based across four strategic pillars which include: new business development and internationalisation; fostering talent and skills across the industries; providing access to education, research, and innovation; and development of the cluster ecosystem through industry and other stakeholder relationships.

Together, these businesses have combined annual revenues in excess of €300 million per annum, while providing sustainable employment for more than 1,000 people throughout the entire calendar year. The Killybegs Marine Cluster is an Internationally recognised cluster, with 95% of the turnover generated by the members from export markets.