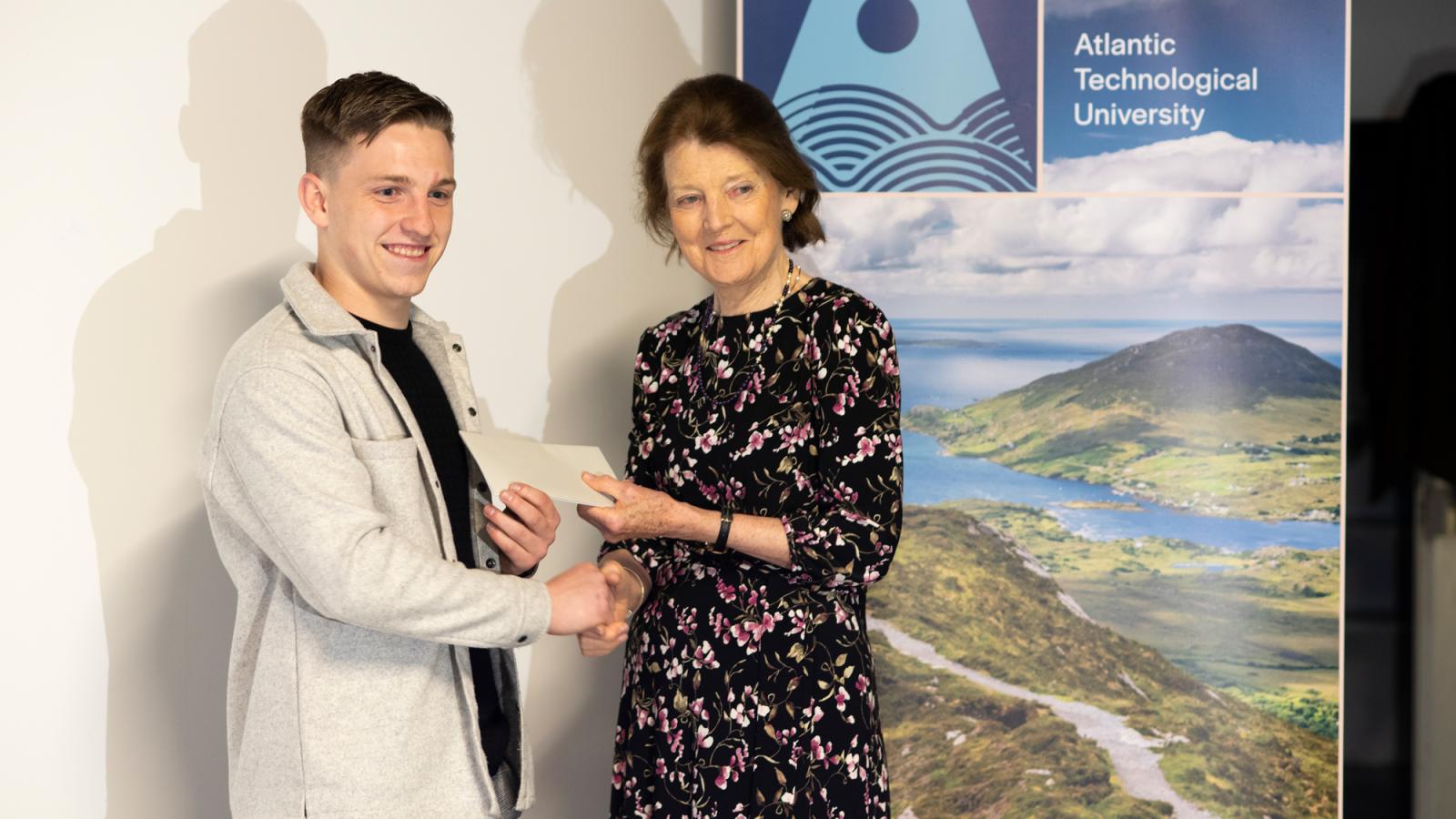 Kevin, who has just completed his final year on the Bachelor of Science (Hons) in Furniture Design and Manufacture programme at ATU’s Connemara campus, was presented with the award of £1,000 sterling by trustee of the Foundation Mary V Mullin at the launch of Legacy, a special exhibition of graduate’s work at Interface Inagh, Connemara.  It is the first time that The Foundation has awarded a prize for Furniture Design outside of the UK, an acknowledgment of the Foundation’s recognition of the high standard of furniture design created by students of the B Sc (Hons) in Furniture Design & Manufacture programme at ATU Connemara.

Established in 2012, The Robin and Lucienne Day Foundation preserves the legacy of the pioneering 20th century furniture and textile designers. It aims to promote appreciation and understanding of design and provides opportunities for the general public and students to further their study of design. The prize is one way in which the foundation supports this endeavor by making awards to students of design.

“We are delighted to award a prize to celebrate the success of this year’s Robin Day Furniture Project, a collaboration between ATU and the Robin and Lucienne Day Foundation. My co-trustee Mary Mullin and distinguished furniture designer and tutor Alan Tilbury have generously dedicated their time and expertise to the project, and I am touched that my father’s design legacy has been celebrated this year at the Atlantic Technological University Connemara, Ireland’s National Centre for Excellence in Furniture Design and Technology. ”  says Paula Day, Founder and Chair, The Robin and Lucienne Day Foundation.

An Chathaoir Oidhreachta is the Irish for the legacy chair, and a fitting reference to both the theme of this year’s project, Legacy, and to the legacy of Robin and Lucienne Day. Kevin designed the chair to be used not only as a place to sit down but also to relax to a rocking motion. The structure of the chair is made from oak and the cushions are made with a foam filling and a Foxford herringbone weave textile cover. The oak frame is finished in a natural Osmo oil. The four bridle joints add a beautiful aesthetic to the piece with the contrasting grain formations. This chair is designed to be manufactured to stand the test of time so that it can become a legacy, passed down from generation to generation." It was an honour to have my chair design recognised as award worthy amongst such a talented group of designers. Winning the award has been the highlight of my four years in ATU Connemara and I'd like to thank The Robin and Lucienne Day Foundation for this opportunity." says Kevin.

The project was launched in November 2021 by lecturers Jeremy Madden and Dr Susan Rogers for final year students of the B Sc (Hons) in Furniture Design and Manufacture programme. The theme was ‘Legacy’, and students were tasked with designing a chair that would embody the values and ethos of the Robin and Lucienne Day Foundation. Throughout the year the students were supported by advisor to the project Alan Tilbury, award-winning furniture designer and educator.

Acknowledging his contribution to the project,  Mary Mullin describes Alan as “a talented designer whose wide body of work ranges from the Cathedral Chair for the Archbishop of Canterbury to public park seating in Bristol.  He is a gifted and dedicated teacher who has shared his knowledge, experience, and enthusiasm for detailed design with a generosity of spirit with the students who participated in this project.  The Robin and Lucienne Day Foundation is deeply grateful .”

Head of Department, National Centre for Excellence in Furniture Design & Technology, ATU Connemara, Paul Leamy says:  “We were delighted and privileged to work with The Robin and Lucienne Day Foundation on this engaging project. Our students were challenged to respond to a stimulating design brief and the final show of work is testament to their creativity and skill and to the team who directed them. Heartiest congratulation to Kevin and his winning design. I look forward to seeing the opportunities it will present.”

All ten designs were exhibited at Interface Inagh, Connemara from 19 to 21 May. The winning design can also be viewed at the annual summer show which runs at the ATU Connemara campus in Letterfrack village from 21 June to 19 August 2022.
For information about the courses available in ATU Connemara and ATU School of Design and Creative Arts, see: 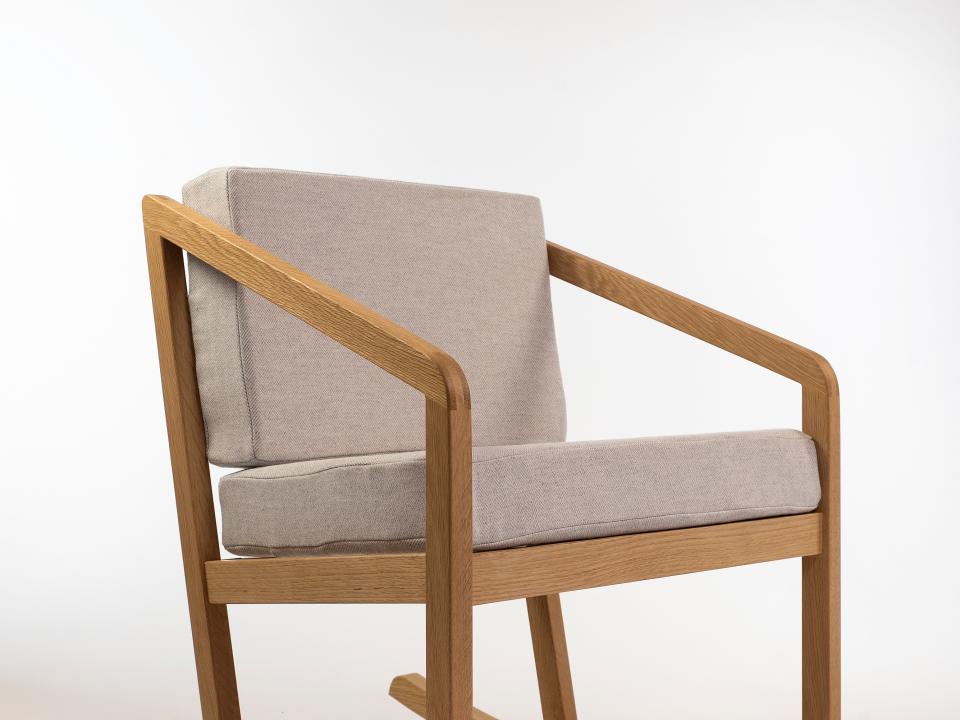 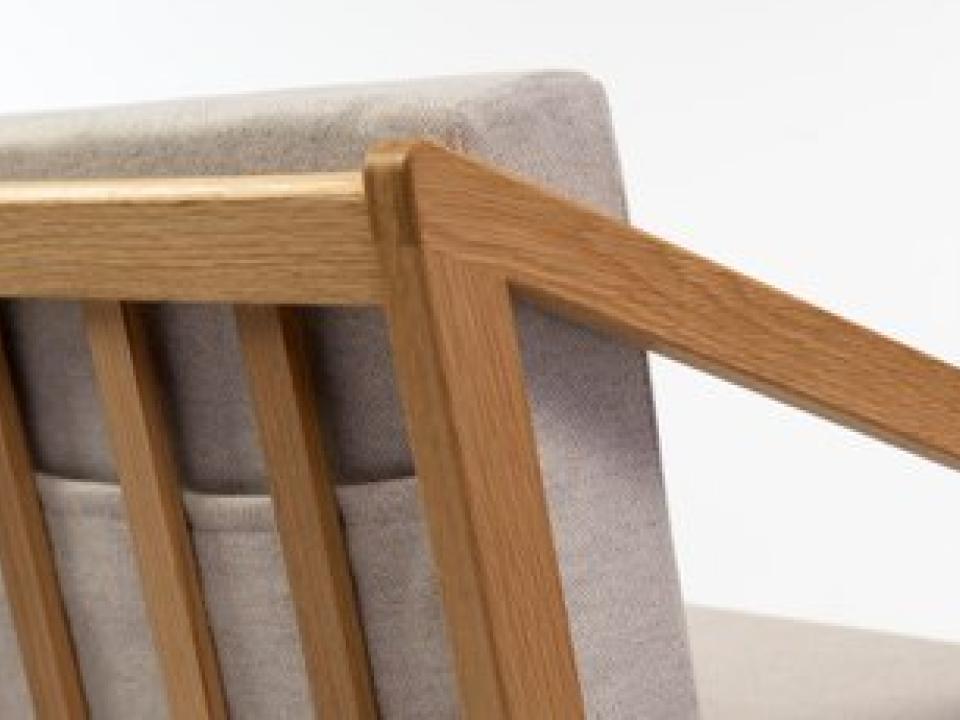 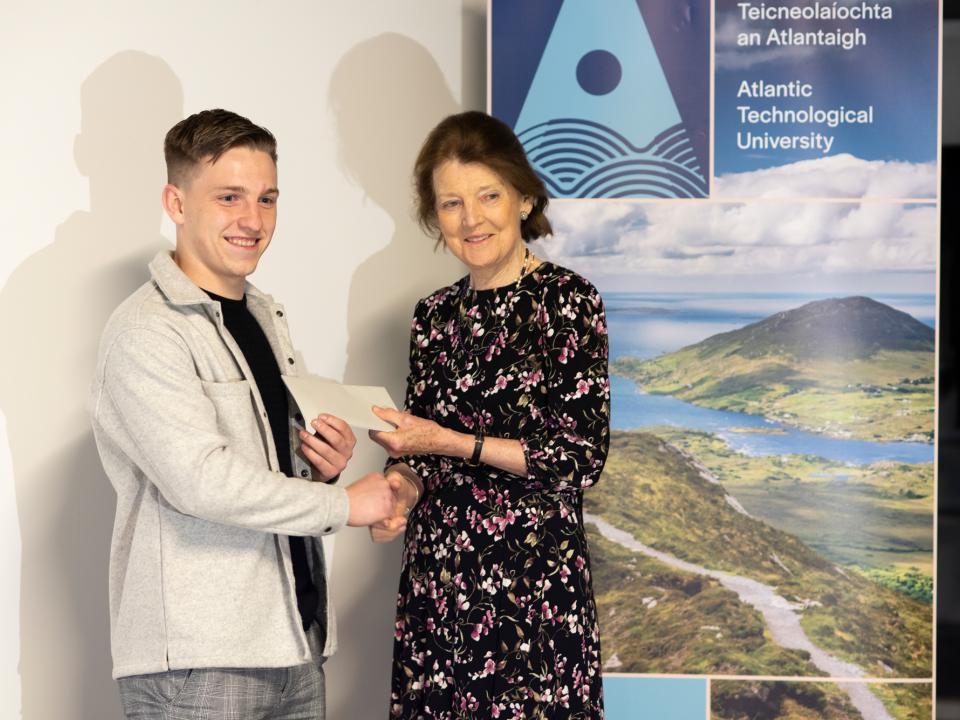 Kevin O’Kennedy being presented with £1000 prize by Mary V Mullin, Trustee of The Robin and Lucienne Day Foundation. 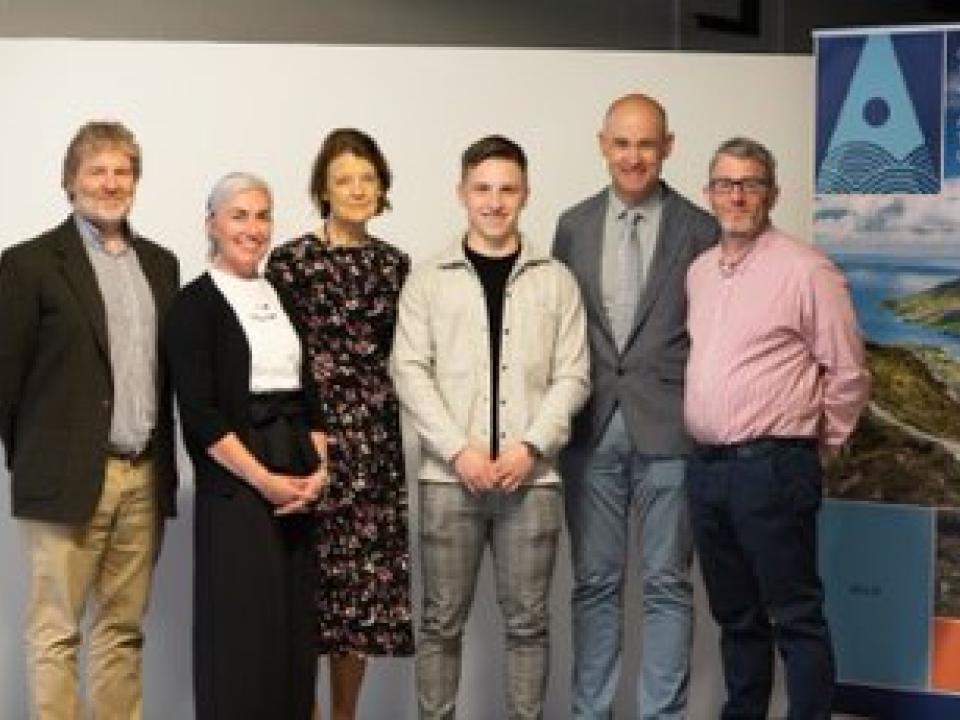 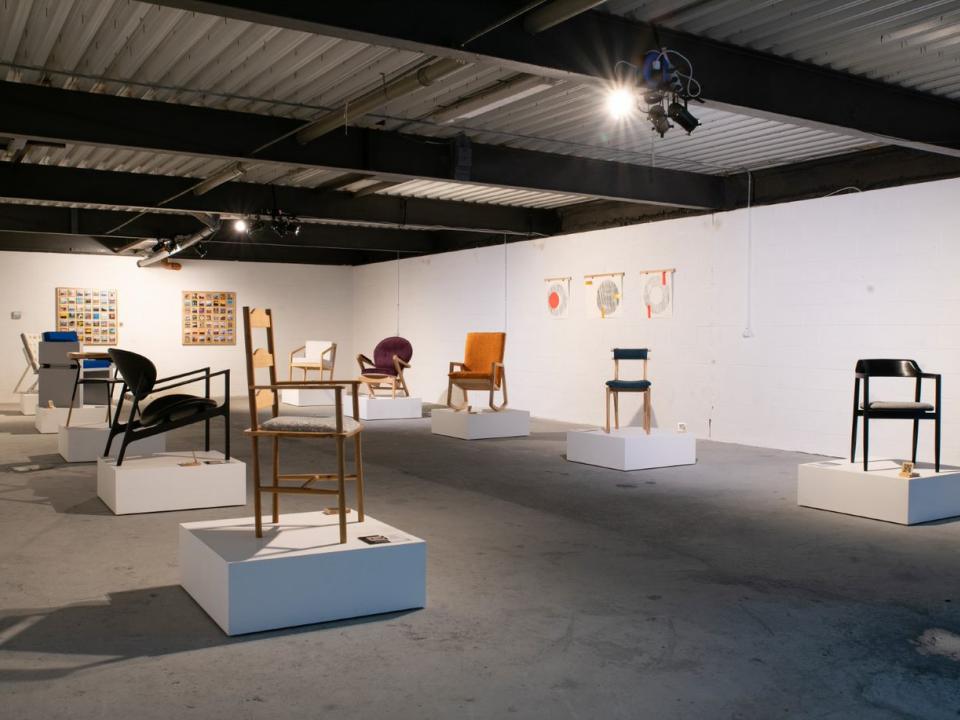 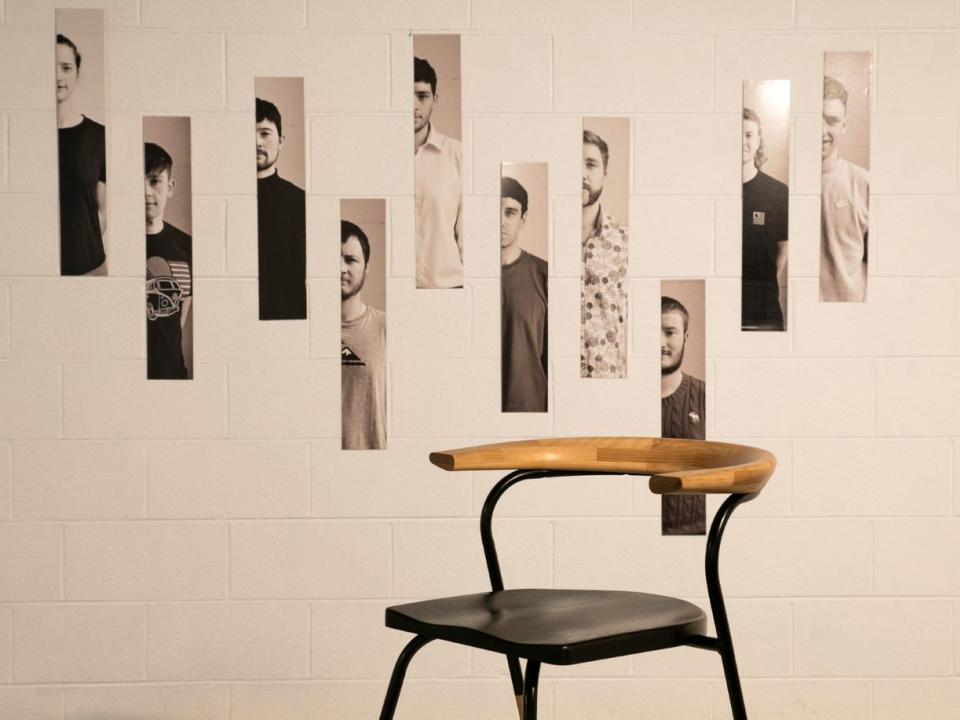